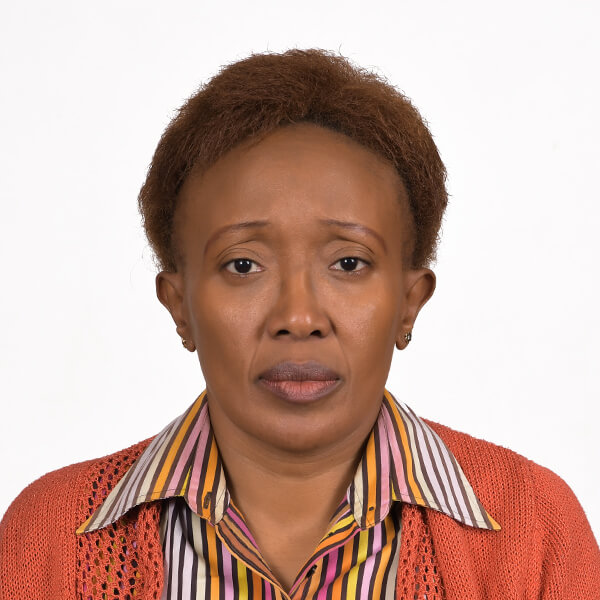 Dr. Gladwell Kiarie graduated with MBChB (Bachelor of Medicine and Bachelor of Surgery) degrees from The University of Nairobi in 1999 and commenced her internship at Kenyatta National Hospital from the year 2000. She then went on to receive her post graduate degree in Internal Medicine in 2004 from The University of Nairobi. She later did her Medical Oncology fellowship at St. Bartholomew’s Hospital and the Royal London Hospital in England, UK, which she completed in 2006.
‍
After sub-specialization in Medical Oncology, she returned to Kenya where she was one of the founding members of the Oncology Unit at the Aga Khan University Hospital in 2007. She was also part of the team that set up the first Kenyatta National Hospital/University of Nairobi Tumor Board in 2007 that initiated multidisciplinary management of cancer patients in the institution including personnel from the surgical and medical departments.
‍
She joined the University of Nairobi in the Clinical Medicine Department as a Lecturer in October 2008 and was subsequently promoted to senior lecturer in 2015. While at the University, she authored journal publications and supervised research for both undergraduate and postgraduate research students. In 2016, after taking a Sabbatical from the University, she enrolled for a PhD program with the Bart’s Cancer Institute under the supervision of Professor John Gribben. In 2017 she received Fellowship to the Royal College of Physicians of Edinburgh.
‍
She currently runs a private practice at The Nairobi Hospital and also reviews patients at other leading hospitals in Nairobi including The Aga Khan University Hospital, MP Shah Hospital, Karen Hospital and Avenue Hospital.
‍
Dr. Kiarie is currently the Division Head of Medicine in the Medical Advisory Committee (MAC) of The Nairobi Hospital. This committee is elected by the Admitting Staff Association (ASA) to oversee clinical governance in the hospital. She also serves in the Kenya Medical Practitioners and Dentists Board, which is the national regulatory board for doctors in Kenya, since her appointment in 2015.
‍
She has been involved in setting up the oncology clinic at The Nakuru Provincial General Hospital since May 2017.
‍
She is a member of the Kenya Society of Haematology and Oncology (KESHO) where she also served as the treasurer in 2004 and is also a full member of the American Society of Clinical Oncology (ASCO) as well as European Society for Medical Oncology (ESMO).
‍
Dr. Kiarie continues to be an advocate for early diagnosis of cancer and is greatly involved in programs that focus on providing easy access to basic screening services to the under privileged including setting up oncology services at county level. In recognition for this, she won the Union for International Cancer Control (UICC) in 2014 for screening in poor settings.
‍
She continues to create awareness through published & broadcast media. She is also active participant in the formulation of national guidelines for screening and treatment of cancer.